Wages are surging across the rich world 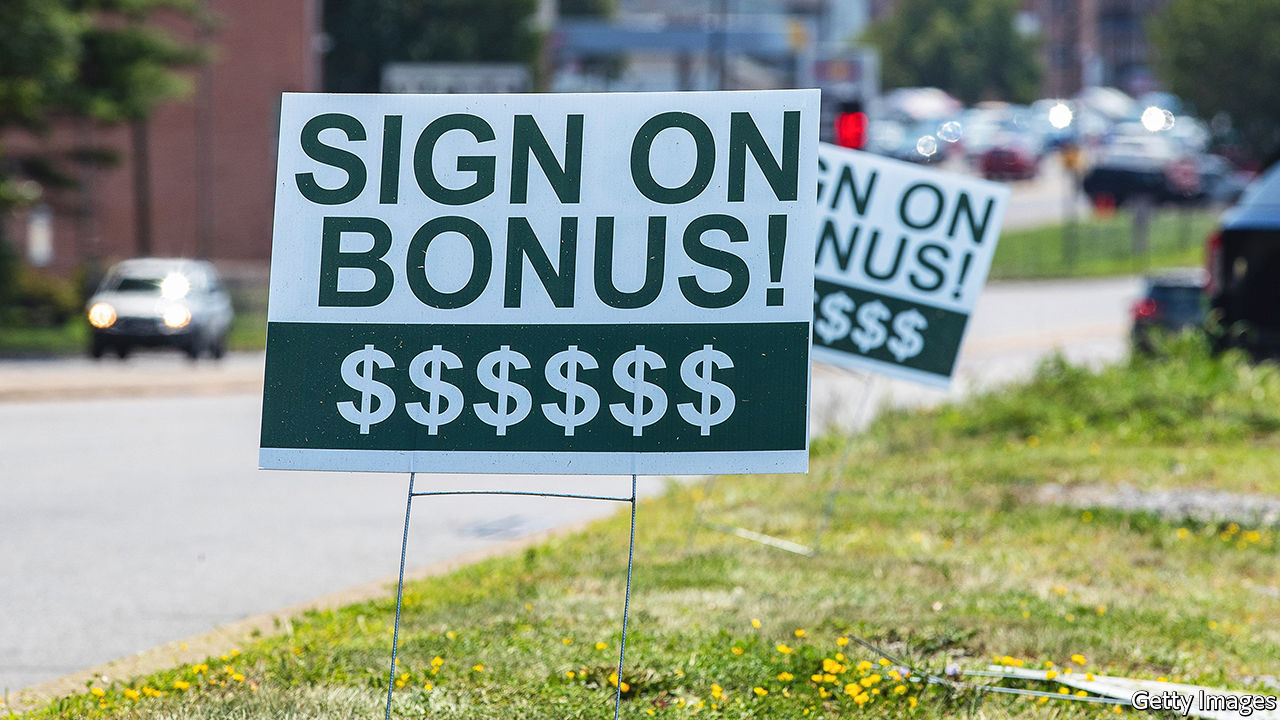 NOT LONG ago pundits obsessively checked the latest statistics on covid-19 cases. Now they are doing the same with the inflation numbers. American consumer prices rose by 5.4% in the year to September, according to figures published on October 13th, exceeding economists’ forecasts. A survey from the New York Fed released the previous day showed a small pickup in consumers’ inflation expectations. In its semi-annual report on the global economy the IMF warned that the prospects for inflation were “highly uncertain”. Soaring energy costs will push up consumer prices in the near term. Pay, too, is surging, as red-hot demand runs up against a shortage of workers. Does it stand to fuel further price rises?

When covid-19 first struck, most forecasters expected bosses to slash bonuses and yearly rises, or even to cut basic pay, as they did after the global financial crisis in 2007-09. Although wage growth did slow modestly early in the pandemic, that restraint has since been abandoned. Oxford Economics, a consultancy, finds that pay in the rich world is growing at a rate well north of its pre-pandemic average. The acceleration in compensation per employee across the OECD, a club of mostly rich countries, is equally arresting (see chart 1).

The wage numbers have sometimes misled during the pandemic. When lockdowns were imposed poorly paid people in service jobs dropped out of the workforce, for instance, which had the effect of raising average pay as measured by statisticians. Even so, wage growth seems to have been stronger than the scale of the economic downturn alone would have suggested. Goldman Sachs, a bank, has created a “tracker” that corrects for pandemic-related distortions. Underlying wage growth, at about 2.5% across the G10 group of large economies, is as fast as it was in 2018.

No wonder then that pay has become a hot topic in the corporate world. On October 6th Bank of America increased its company-wide minimum wage by 5%. Amazon now boasts of roles in transport and packaging paying $22.50 an hour in America, making left-wing activists’ demands for a federal minimum wage of $15 seem quaint. An index compiled by Goldman suggests that the share prices of American companies most exposed to rising labour costs have fallen by 4% since May, even as the broader stockmarket has risen by 7%. Even bosses in Germany, long used to acquiescent unions, now face demands to pay up.

Some workers are benefiting more than others. Analysis by The Economist of British wage data by industry suggests that annual pay growth is twice as dispersed as it was before the pandemic. Wages in the accommodation and food-service sector, which is struggling to attract workers, rose by 8% in the year to July; increases in manufacturing have been more modest. In America the wages of the least-paid quartile of workers are growing 70% faster than those at the top (see chart 2).

Underlying pay is rising about three times as quickly in Anglo-Saxon countries as in continental Europe. That could be because places such as America and Canada rely more on the consumer-facing industries experiencing the worst labour shortages. And France and Italy, where annual pay growth is below 1%, probably do not face the same immigration crunch as Britain, which has Brexited, or Australia and New Zealand, which have closed their borders to keep out covid-19.

Only a few years ago economists were bemoaning weak wage growth. So it may seem churlish not to pop the champagne now that the opposite is happening. But pay can rise for a variety of reasons, some more benign than others. For a given level of productivity, higher wages must show up in one of two ways: as higher inflation or as a higher “labour share” of GDP.

Take inflation first. Costlier staff may force bosses to raise the price of whatever they are selling. At worst, higher inflation could cancel out any rise in cash wages, leaving workers no better off than they were before (and perhaps encouraging them to seek further increases). American real wages are growing on a monthly basis but they remain lower than a year ago.

Some firms seem happy to pass on a bigger wage bill to consumers. On a recent earnings call an executive at Domino’s Pizza discussed how the firm might offset wage rises (pricier margheritas might be on the way). Most S&P 500 companies are protecting margins “by passing on price increases to consumers”, says Goldman.

Other firms, however, may absorb higher wages by accepting lower profits. That would change the distribution of the economic pie, raising the “labour share”, or the proportion of GDP paid to workers as wages. Our analysis suggests that the labour share in the G7 has risen by about one percentage point since the pandemic began—equivalent to $400bn or so of extra real income for households each year.

What does this mean for the wider economy? A big topic of debate among economists is whether the labour share before covid-19 had been declining or not. It seems most likely that the share fell in America, so a recovery might be welcome. But an ever-rising labour share would be a worry: it would crimp companies’ profits and thus the investments that are crucial to improving long-run economic growth.

There is another, happier, possibility. If productivity rises, then wage growth need not cause sustained inflation, nor push up the labour share. Instead the economic pie would grow, with more for everyone.

Some evidence suggests that workers are doing more with less. Firms are investing in new technologies to meet new demands, especially from online commerce. “Hybrid” work may be more efficient than everyone being in the office all the time. Productivity statistics are even cloudier than the wage ones; but since the third quarter of 2020 output per employed person has risen in 25 of the 29 rich countries for which figures are available.

The rise in wages, then, seems to reflect a number of underlying economic forces, and need not feed through entirely to inflation. But forecasting prices is just as hard as predicting covid-19 case numbers. One thing is clear: that if the pay surge endures, the consequences will be profound. ■

What to make of the new bitcoin-linked exchange-traded fund

How soaring energy costs could hobble the covid-19 recovery

Why it matters when trades settle